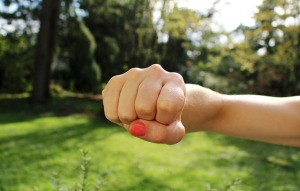 How many times have I told myself that over the years? “Get behind me Satan!” It has been too many for me to count. Satan. The master deceiver. The author of confusion. The one who hates God and His children. The one who wants to destroy homes, churches and testimonies. The one who whispers in your ear to make you doubt. He has truly been working overtime.

In our churches and homes, we see so many casualties of Satan’s handiwork. Division in the church. Husbands or wives leaving the marriage for something else they think will satisfy. Homes where God isn’t glorified. Children who rebel against authority in the home, church and school. Marriages crumbling. Pastors falling prey to sin. The list can go on.

Satan works hard to destroy Christians because of the impact we can have on this sinful world. The way we can make a difference in someone’s life who needs Christ. We are on a mission for God. A mission to live a life pleasing to Him and to reach others with the Gospel. Satan doesn’t want that mission accomplished. He wants us to be ineffective in that mission. How does he do that? By planting seeds of doubt, ideas of sin and moments of confusion in the Christian’s mind and life.

In my own life, Satan works very hard on my mind. It is almost like I can hear him whispering the lies in my ear. I know what he is saying is a lie. But because Satan is such a good liar, it sounds like truth, and I have to fight against it. How I wish it was a one-time battle. You know what I mean. You called Satan out on the lie, and he left you alone. Unfortuately, Satan comes back again and again. He did for Christ. In Luke 4 we are told how Jesus resisted Satan’s temptation, but Luke 4:13 says, “And when the devil had ended all the temptation he departed from him for a season.” That means he came back. He wasn’t gone for good.

One important way to fight Satan is to quote scripture. When Jesus was tempted by Satan, He quoted scripture. Jesus, the Son of God, used the Bible to defeat Satan. And we can too. Quoting scripture helps us focus on the truths God has promised. It helps us remember to look to God for help in the battle. “…Thus saith the LORD unto you, Be not afraid nor dismayed by reason of this great multitude; for the battle is not yours, but God’s.” (II Chronicles 20:15). Quoting scripture silences Satan.

Another way to fight is to pray. Talk to God. Tell Him of your battle. Even though He already knows about it, praying helps us give our fears, concerns and sins to God. Ask for Him to help strengthen you through the battle. To give you wisdom to know the lies from truth. Praying helps us stay humble because by bringing Satan’s attacks to God, we realize that we can’t fight him on our own. We need God’s power to enable us to fight.

II Corinthians 10:5, “Casting down imaginations, and every high thing that exalteth itself against the knowledge of God, and bringing into captivity every thought to the obedience of Christ.” We need to bring our minds into captivity. I know I do. The lies he is trying to get me to believe, they are just that – lies.

Stand strong! Fight the whispers. “Finally, my brethren, be strong in the Lord, and in the power of his might.” (Ephesians 6:10). Remember in the end, God wins the battle. Not Satan. He is defeated. Keep fighting as you live this Christian life. Tell Satan “get behind me.”

One thought on “Get Behind Me Satan”

Welcome to my blog! Hope it is a blessing.

In Case You Missed One